Islam attention to the problem of poverty is enormous. In Big Indonesian Dictionary, the word “poor” is defined not proverty objects; underprivileged or low income. While the “indigent” is defined as people who are very needy or very poor. As in Arabic, said the poor are drawn from the word “Sakana” meaning quiet or calm. While faqir of the word “faqr” which originally meant the backbone. Faqir is the one who broke his spine, in the sense that the burden of assuming so heavy that broke his spine. 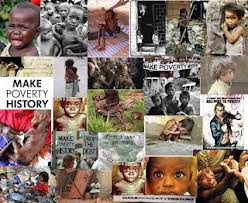 The Qur’an mentions the word poor and masakin as much as 25 times, while the faqir and fuqoro up to 14 times (Muhammad Abdul-Baqi ‘). Noting the root of the word “poor” referred to above may mean still or not moving. Because poverty is a major factor in silence, reluctant, or unable to move and try. Reluctance to attempt is the persecution of myself, was the inability of trying, among others, due to human persecution 1ain. Inability tried caused by another person termed also with structural poverty.
In Islam there are two schools of thought in explaining about who actually called poor. First, the Hanafi and Maliki schools of thought that argues that the poor are people who do not have nothing, too. Second, Hanbali and Shafi’i schools of thought that says it is poor people who have half of more but not sufficient. In our lives, usually used as a poor word compound words with the faqir, so be faqir poor, which means roughly the same. According to the opinion of the writer, faqir can be equated with poverty and poor absoulut with relative poverty.
Natural resources prepared by God to mankind is not infinite and unlimited. If something has been exhausted, then there are other alternatives provided by God for human effort. Therefore, there is no reason to say that natural resources are limited. But the human attitude toward others and his attitude toward himself is what makes some people do not get those resources. On the other hand, poverty is caused by an imbalance in the acquisition or use of natural resources is termed the attitude of persecution or because of man’s reluctance to explore the natural resource itself.
Contemporary approaches to see that the causes of poverty can be seen from the following three theories: First, theories that emphasize the values​​. They are poor because they are stupid, lazy, not resilient, does not have achievements, fatalistic. Second, the theory that emphasizes the economic organization of society. The theory assumes people are poor because of lack of opportunities and a chance to improve their lives. Third, the theory that emphasizes the power-sharing in the social structure and order masyarakat.Tatanan and the existing structure of society regarded as the result of coercion (not consensus) of a small group of community members of the ruling majority and the rich in the poor, and this is the major cause of poverty.
The way out of this theory vary as well. For the first theory of how they must dicerdaskan, whereas for the second theory is the need for industrialization way to drop down there. For all three theories are in need is reform of the structure. Judging from some of the theory there are several approaches to understanding poverty and the causes which can be simplified, because that is backed by a theory of cultural capitalism and cause structural markisual backed by the theory. But there are still other reasons that should not be forgotten, namely natural events and so forth.
In order to alleviate poverty, the Quran recommends many ways to go, which can be broadly divided in three main points, namely the obligation of every individual, Liabilities other people / communities, government obligations. Work and effort is first and foremost a way that is emphasized by the Holy Book Quran, because this is in line with human instincts, as well as an honor and pride.

“Beautiful cite this as the (outlook) to the enjoyment of human lust, a woman (opposite sex), a treasure that many of the types of gold and silver, horses of choice, cattle, and rice fields. This is the pleasure of the flesh. and in Allah place except yany good ” (Surat Ali ‘Imran: 14)
Yusuf Qardawy stated that poverty could be eradicated if every individual achieve a decent standard of living in society. And to achieve a standard of living were idealized Islam contributed in various ways with the street as follows: Each individual is required to work, sufficient for a weak family, Al-Khizanah al-Islamiyah (Islamic or source material in the Baitul Mal), zakat and shodaqah. The Qur’an has emphasized the message several times that the Muslims do not hold their wealth and income for themselves only. But after inadequate to meet their needs, they must carry out obligations to the family closer to their neighbors, and others who need help in the community and are required to consider the interests of the poor.
Actions intended by Islam that is the first positive action that is used to prevent concentration of wealth and helped to spread in the community. For example, spreading into the community and the charity law of inheritance. These efforts to foster and maintain continuity of social justice in society. Second, the prohibition of measures used to prevent practices that are not healthy, wealth accumulation, spending a futile and so forth.
To achieve the ideals of economic justice in society as mentioned above which, Islam presents the ideals are very high in individuals so that his life not only to meet the needs of the stomach. Thus, Islam is an alternative in solving the problem of poverty, in contrast to feudalism which only enjoy the well-being through the sweat of others, different from the capitalism that justifies usury system, different from the socialism that does not justify the right of inheritance. Here Islam has a social concept for those who have excess wealth through charity, and so on. Wallahu A’lam !!!
by : Hasrul BS
Note : Baca dalam Bahasa Indonesia DISINI
http://feeds.feedburner.com/ZyiarBs